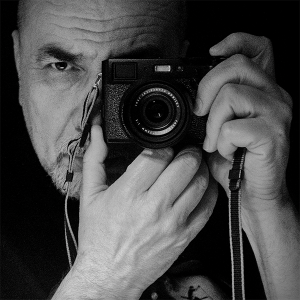 Max Juhasz was born in 1967 in Vukovar. Started as a photographer during the war for Croatian independence in 1991. He is the founder of the photography collective KADAR 36, and a member of the Croatian Association of Visual Artists – HDLU. He lives and works in Zagreb, Croatia.

“Although he does not belong directly to the current dominant photographic trends, his work, based on the classics of the black & white documentary and street photography, by its subjective documentarism in the form of visual storytelling, corresponds to the contemporary tendencies, defining him both stylistically and as an author. Reflecting through the symbolic interpretation and juxtaposition, his photographs, full of nostalgic melancholy, neo-noir dystopia and subtle sarcasm or humor, show the main traits of his work, which can perhaps best be characterized as an intuitive observation, urban adventure and a kind of visual diary. In his intention to create evocative images, his work clearly resists the global mediocrity in the world of consumerist culture and hyper-production of banality.” (Sonja Švec Španjol – MA Art Historian)